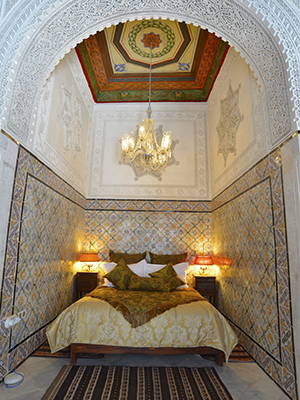 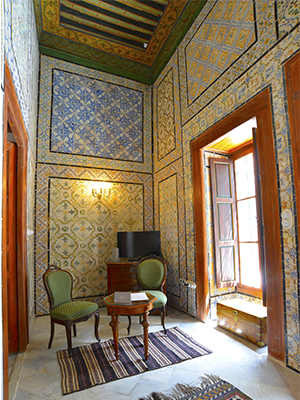 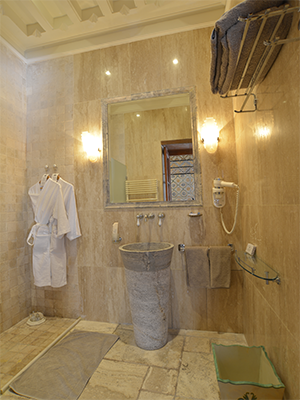 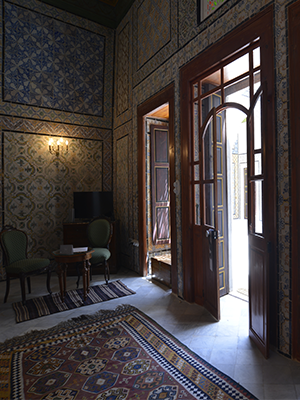 It is a large suite located on the ground floor in the central patio. It is entirely decorated with traditional elements, showcasing Tunisian urban style of eighteenth century, starting from the marble slabs of the floor and beautiful zellijs (local pronunciation:”zliz”) adorning every square inch of the walls, to finely hand carved stuccoes in upper part of the central alcove; the paintings of the main high ceiling and part of the smaller square one are mixed eighteenth and nineteenth. The suite comprises a bathroom the walls of which are covered by marble and stone tiles, a separate toilet and a dressing-room. The furniture is classical French “bourgeois” styled.

“Princess Aziza Othmana suite” presents a perfect inventory of Tunisian urban taste decoration in eighteenth and nineteenth centuries.
Floors are covered with ancient marble slabs; walls are entirely covered with ancient zellijs (local preferred pronunciation: “zliz”) from Italy (Sicily), France (Aubagne) or genuine Tunisian earthenware workshop (Gallalin). Coffered ceilings are painted and, fortunately, the original colors have been protected by the following layers painted one on the others
The original gypsum stuccoes had been destroyed and new panels have been created by the best team of Tunisian stuccoworkers, following the most emblematic geometric patterns of Arabic art.
Interior and exterior marble frames of doors and windows have been sculpted with emblematic patterns (rosettes, crescents and clouds). They are original and have been carefully restored on the spot. Some of them, in a very bad shape, had to be abandoned and replaced by similar elements of the same period. The bathroom is covered with luxury porous stone and marble slabs. The sink is carved out of a gray local block stone in a contemporary style.
Furniture is classic French “bourgeois” style, except for the crystal chandelier, with crystal engraved tulips (“laleh”), which is closer to «orientalist” and palatial inspiration… All the seats have been reupholstered by excellent artisans of the Medina, with embroidered or embossed silk pieces, also manufactured in the labyrinth of workshops back lanes (“The Wikalas”) surrounding the Palais. Last, not least, a large Asian tribal kilim with “desert spider” motifs looks pretty much like some of the region.
Removal, storage, conservation, sometimes renovation, and refitting of tiles required great attention. The mural compositions were recreated first on computer then on the walls, using every single piece of our residual collections. Depending on the requirements of the original decoration or on the walls geometry, we have followed either the principle of symmetry or the more oriental system of non-alternating patterns. All the panels are surrounded by borders of different tiles, the colors of which match one another in this highly representative apartment.
The colors of doors and shutters have been restituted according to the aesthetics of Tunisian eighteenth century, after recreating antique paints out of pigments of mahogany (red), curcuma (yellow) and walnut (black). In line with the taste of the Ottoman “Laleh Renaissance”, floral art is omnipresent and gold is absent in this elegant space.
Like other apartments of the palace, the “Aziza Othmana suite” has a WIFI relay, a fixed line with the reception and a very silent air conditioning system based on water circulation. It is equipped with a smoke detector to the standards of Tunisian civil Protection.

The name of this suite is a reminder of a famous Tunisian princess of the beginning of seventeenth century, first wife of Hammouda Pacha-Bey (1631-1666). She dedicated her life and her fortune to charitable actions, as for instance the Aziza Othmana general hospital, which is working up to now, Kasba Square , at a stone’s throw from “Palais Bayram”.