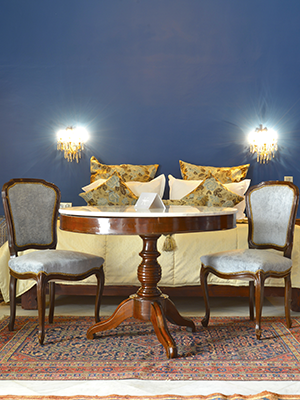 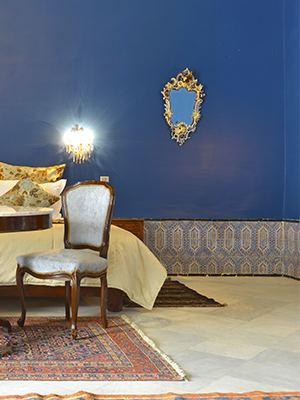 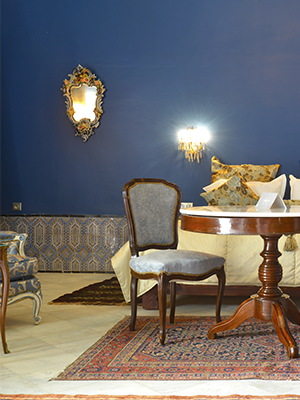 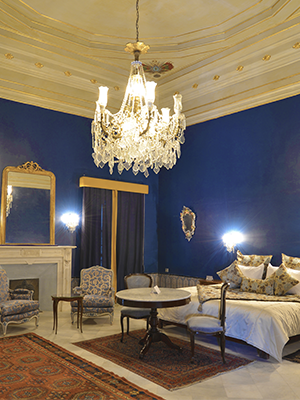 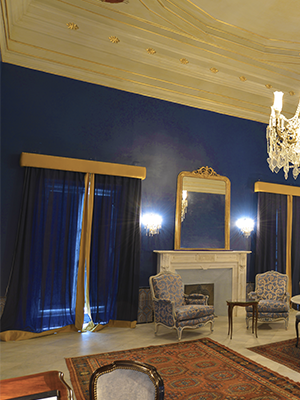 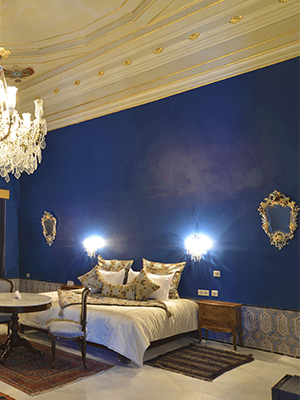 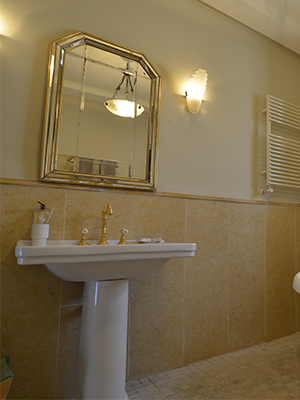 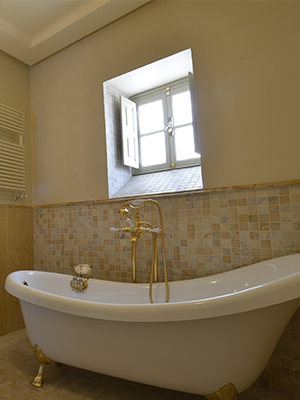 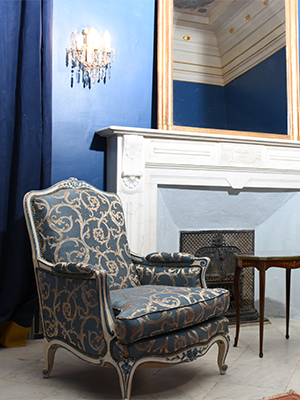 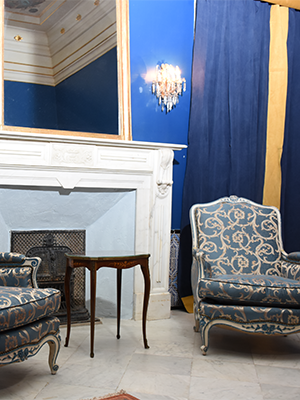 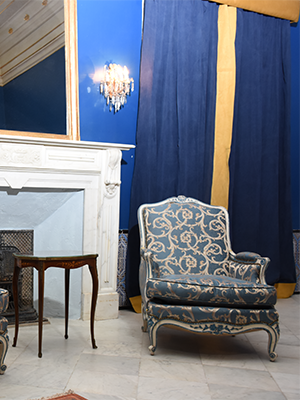 This Prestige suite is situated on the second floor, in the noblest part of the Palais, at the same level as “Sheikh Bayram’s suite”, with which it communicates through a tiny boudoir, where its dressing-room is located. Its style is more Haussmannian and seems French influenced. It has an art’ deco bathroom with a bathtub, a dressing-room and a marble fireplace; the furniture is ancient and the carpets and kilims are beautiful collectibles.

This suite, the most “Parisian” of the palace, is on second floor, a bit higher than the Kheireddin “hanout-hajjam” suite. It was built in nineteenth century and is clearly of Haussmannian inspiration: a square plane with a fireplace and two symmetric windows “over the street”.
Its flat ceiling is a painted canvas stretched on a circle molding inscribed in a square, the white color of which is slightly stressed by golden sticks. Each of the four corners is adorned with the beautiful red and green emblem (“Khabshas”) of the last Tunisian dynasty, the Husaynid Beys (1705-1957). The walls of this rather “aristocratic” suite are, unsurprisingly, painted in “king blue” (bleu Roi). A highly decorative chandelier with crystal drops and opaline candle-holders adds a princely touch to the classy decoration.
The original marble floor is dressed with two exceptional carpets: a large Turkmen styled “Khotan” (last oasis of Eastern Turkestan) and an aged “Tabriz” carpet (north-west of Iran).
The art’ deco styled bathroom has a bathtub and the bottom of the walls is covered with the celebrated yellow marble from Chamtou (north-west of Tunis/UNESCO inventory).
A boudoir, which links this suite with the Sheikh Bayram’s, is used as a dressing-room; it means that, on request, both suites can be joined together into a wider residential apartment, if the customers wish so.
The furniture is ancient and mainly French: “Chevêts”, “Bergères”, “Guéridons”, the wardrobe, hairdresser and a very fine wooden flat desk. Two Meissen (Saxony) porcelain mirrors complete this rare harmony of taste and luxury.
All the seats have been reupholstered by excellent artisans of the Medina, with embroidered or embossed silk pieces, also manufactured in the labyrinth of workshops back lanes (“The Wikalas”) surrounding the Palais.
Like other apartments of the palace, the “Lalla-Qmar suite” has a WIFI relay, a fixed line with the reception and a very silent air conditioning system based on water circulation. It is equipped with a smoke detector to the standards of Tunisian civil Protection.
The name of this suite pays tribute to a prestigious princess, “Lalla-Qmar”, an ancient odalisque of Circassian origin, educated at the Imperial Court of Istanbul and who was the influential spouse of three reigning Princes of the Husaynid dynasty.