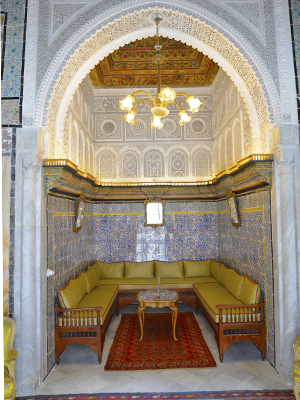 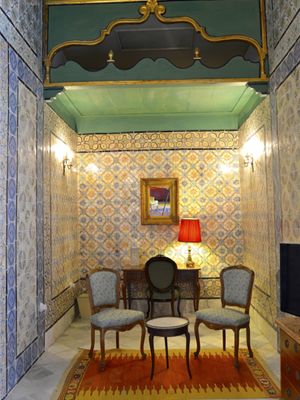 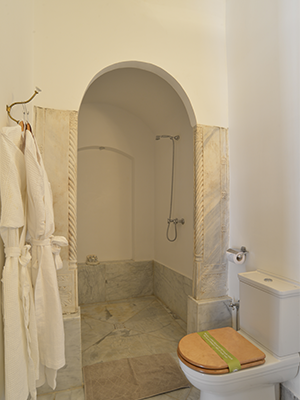 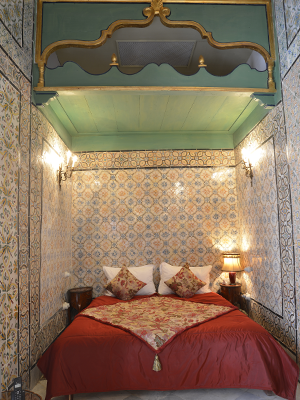 It is a vast historical suite that is entirely covered with traditional elements of decoration. Located on the ground floor in central patio. It has a living room, a large bathroom and a dressing-room. The bed and the desk are fitting the space of the side alcoves, as if custom made. Furniture is ancient including Persian Kilims. The paintings on the ceilings are eighteenth century (1780); the harmony of the ensemble is of great rarity.

First of the T shaped rooms, the “Fatimid suite” presents the complete decorative setting of Tunisian urban arts in eighteenth century. Floors are covered with ancient marble slabs; walls are entirely covered with ancient zellijs (Tunisian: “zliz”) from Italy (Sicily), France (Aubagne) or genuine Tunisian earthenware workshop (Gallalin). Coffered ceilings are painted and, fortunately, the original colors have been protected by the following layers painted one on the others. Thus, a careful cleaning permitted to travel back in time and gave us an immense reward that you will share when looking at the remarkable chromatics of the straw yellow, garden greens and intense reds of Tunisian taste in eighteenth century.
Interior and exterior marble frames of doors and windows have been sculpted with emblematic patterns (rosettes, crescents and clouds). They are original and have been restored on site; some of them, in a very bad shape, have been abandoned and replaced by similar elements of the same period. The bathroom is adorned with two ancient marble elements including a spiral column finely carved in each slab.
The wooden gilded cabochon “à stalactites” (“Muqarnas”), which enhances the center of the square ceiling is another rare masterpiece, more typical of middle eastern cabinetwork, because of its multiple separately sculpted pieces.
Another traditional element in the mansions of the Medina is the carved and painted wood shelves (” Marfa’ “) which separate tiles panels from stucco work: they have been repaired, fixed and slightly repainted.
Furniture remained traditional for the central salon: banquettes and pedestals; as for the rest, some ancient pieces of French decorative repertoire, like the couple of bergères with “chinoiseries” yellow silk or the desk table and “Bouillote” type tables.
All the seats have been reupholstered by excellent artisans of the Medina, with embroidered or embossed silk pieces, also manufactured in the labyrinth of workshops back lanes (“The Wikalas”) surrounding the Palais.
Removal, storage, conservation, sometimes renovation, and refitting of tiles required great attention. The mural compositions were recreated first on computer then on the walls, using every single piece of our residual collections. Depending on the requirements of the original decoration or the walls geometry, we have followed either the principle of symmetry or the more oriental system of non-alternating patterns. All the panels are surrounded by a border of different tiles the colors of which match one another in this exquisite apartment.
The colors of doors and shutters have been restituted according to the aesthetics of Tunisian eighteenth century, after recreating antique paints out of pigments of mahogany (red), curcuma (yellow) and walnut (black). In line with the taste of the Ottoman “tulip renaissance”, floral art is omnipresent and gold is absent in this elegant space. The spectacular Kilim, along with the “Malayer” carpet (in the central salon: “kbou”) give the final touch to a unique place.
Like other apartments of the palace, the “Fatimid suite” has a WIFI relay, a fixed line with the reception and a very silent air conditioning system based on water circulation. It is equipped with a smoke detector to the standards of Tunisian civil Protection.

The name of this suite is a reminder of the glorious Fatimid Dynasty and Empire, born in 910 in Kairouan and Mahdia (it moved to Egypt in 973, created Cairo and the famous Al-Azhar University, and competed with the Abbasid Caliphate of Bagdad until 1171).