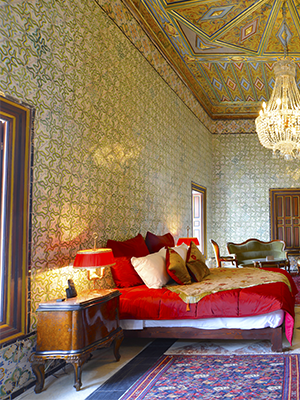 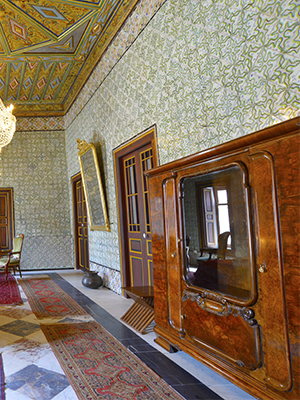 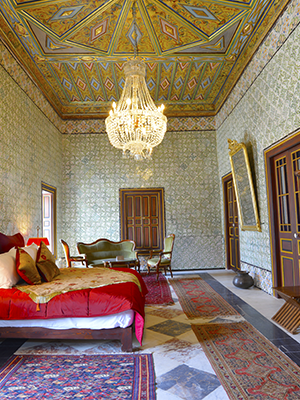 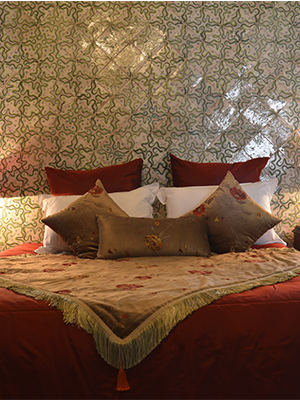 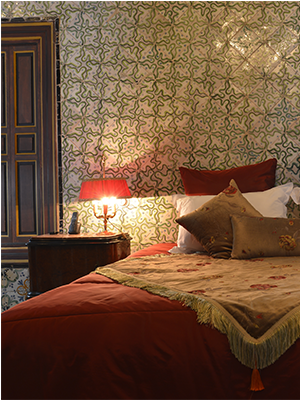 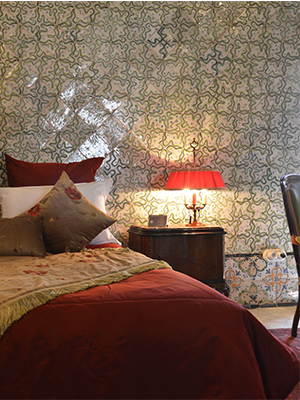 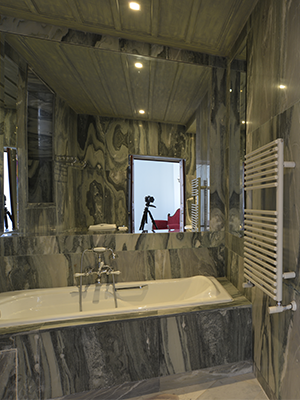 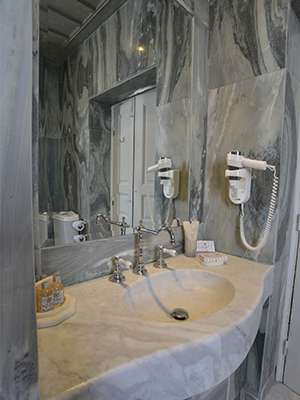 It is a vast outstanding suite, with no alcove and no separate lounge, located on the second floor, in the noble part of the mansion, with private entrance and anteroom. The walls of the huge bedroom are fully covered with ancient white and green faience tiles, fitting very modern trends, and those of the bathroom with a rare Guatemala green marble. But the painted coffered ceiling, carefully restored, and the Italian styled polychrome marble paving are not less remarkable. From one side, the visitors of what was the Sheikh’s private apartment will enjoy a panoramic view on roofs and terraces of the southern part of the Medina and the “Djellaz” wooded hill. The furniture of the suite is classic French or German and, along with the four kilims of Kurdish origin, makes the whole of it elegant and comfortable.

This long and high suite is spectacular, due to its dimensions and the quality of its decoration and furniture. The general state of the walls was good enough (despite the cracks that had to be carefully mended) to allow us not to deposit the unique collection of green faience tiles, except where repairs have been made. But the paving of polychrome marbles had to be removed to ensure the preservation of the precious ceiling of the decorated suite located beneath. The space between these marbles and the ceiling was weighted by an enormous amount of filling materials, endangering the balance of the building. The intermediate beams (see the history of the restoration project with proper photographs) were consolidated and the polychrome paving was carefully replaced with all its tiles, except for a peripheral black marble border, thus giving a new birth to this harmonious “Italian” ensemble.
The painted wood ceiling (richly composed), was repaired and re-gilded as it was originally and provided with a “Montgolfière” chandelier in its middle and a pair of opaline lightenings on the sides.
The furniture is “rustic” French (living-room) and German art’ deco (wardrobe, desk and bedside cabinets). The gilded mirror facing the sitting corner gives depth to the space.
On the ground, two rare “corridor” type Kurdish kilims match the beauty of polychrome marbles; two larger rugs, one from Kurdish make, the other a “suzani” kilim (embroidered with the needle) complete the accessories collection of Sheikh Bayram’s suite.
The bathroom “with a view” is entirely covered with rare Guatemala green marble panels and large mirrors. The sink, carved in a solid block of pale green stone was adjusted on the spot. This bathroom has a bathtub.
Its window, oriented to the south, opens on the terraces of the Medina. The view embraces also the “Djellaz” hill and the Tanit sacred Mountain (Bou-Kornin: “with two hornes”) of Carthage, which emphasizes the beauty of the bay of Tunis. A private anteroom separates the bedroom from the bathroom itself and their two windows share this exceptional panorama.
The colors of doors and shutters have been restituted according to the aesthetics of Tunisian eighteenth century, after recreating antique paints out of pigments of mahogany (red), curcuma (yellow) and walnut (black). All the seats have been reupholstered by excellent artisans of the Medina, with embroidered or embossed silk pieces, also manufactured in the labyrinth of workshops back lanes (“The Wikalas”) surrounding the Palais.
Like other apartments of the palace, the “Sheikh Bayram’s suite” has a WIFI relay, a fixed line with the reception and a very silent air conditioning system based on water circulation. It is equipped with a smoke detector to the standards of Tunisian civil Protection.

The suite was the then private apartment of Sheikh Ahmeyda Bayram, the Ottoman Grand Mufti (“Sheikh-al-Islam”) of the Tunisian kingdom who, at the end of nineteenth century, defended the official language status of classical Arabic. This illustrious family gave to Tunisia, since 1772, the highest dignitaries of Ottoman religious rite and some of the first famous reformers.